The Blonde with the Chevy Nova SS

This past June, I happened to be in the Detroit area during the Gratiot Cruise. Next to Woodward Avenue, Gratiot was where I spent a good part of my “misspent” youth. 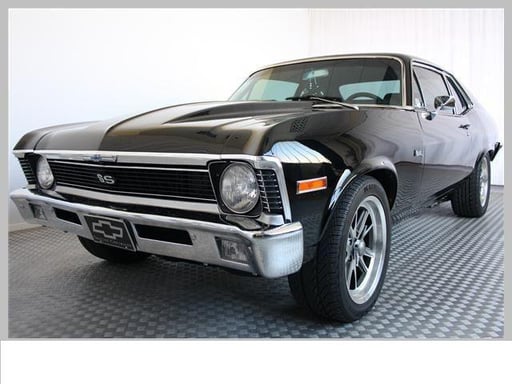 I had a couple of free hours in the morning, so I spent it driving the show from 9 Mile Rd. to 11 Mile Rd. — stopping intermittently to see some of the clubs gatherings of cars. There was a great selection of Mopar (Road Runners, Chargers, Challengers and GTX).  There was a red Plymouth wagon with a Hemi in it.  That would have been a beautiful sleeper to have for a race.  There also was a good mix of GM muscle cars, Fords and rods.  I saw this beautifully restored 1969 Chevy Nova that brought back a memory of some of the stupid insensitive things teenagers would do.

Back then I cruised with my buddies in a 1968 GTX 440 six pack with a Hurst four-speed.  It was a better chic magnet than my 1967 Fiat 850 Coupe.  We spent most of our evenings at the Big Boy’s, on the corner of Gratiot and 9 Mile Rd.,  just socializing with our friends and driving up and down Gratiot Avenue trying to look cool.  Occasionally, we’d pull a hole shot to try to impress somebody.

One night I saw this brand new black 1969 396 Nova.  That car caught my attention.  I just had to drive that car. Over the next couple of weeks, I would see the car at Big Boy’s several times.  It was driven by this nice-looking blonde.  I mustered up some nerve and asked her out,  just to cruise with me.  Surprisingly, she said yes.  She even suggested that we take her car and I drive.  I thought I had won the lottery.

The car was great, plenty of power, it handled well.  I liked it.  Can’t say as much for my date, that didn’t go so well.  There must be something wrong with me.  I can’t remember her name or what she looked like (other than the blonde hair).  But I do remember that car as if it was yesterday.

Matt Agosta is the President of Steele Rubber Products. He is an avid car-enthusiast. When he is not working or restoring one of his classic cars, he enjoys traveling with his wife, local author Carolyn Steele Agosta.