We are very proud to announce that President and CEO, Matt Agosta, will be inducted into the SEMA Hall of Fame this year. The Specialty Equipment Marketing Association (SEMA) chose Agosta along with two others (Gary Hooker and 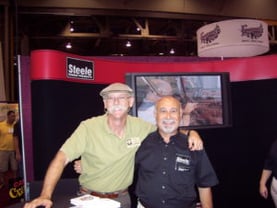 Chip Foose) for his impactful contributions to the automotive industry.

SEMA recognizes Agosta as “a pioneer in advocating

for legislative issues, forging relationships with OEMs and supportin

g small businesses to succeed.” This is a significant honor not only for Agosta, but for all of us

Agosta began working at Steele in 1975 for our founder and his father-in-law, Lynn Steele, and became President in 1989.  Agosta has been an asset to his family, community and business and continues to teach the next generation what it takes to be a strong and influential leader.