At Steele Rubber Products we pride ourselves on being car guys… and girls, okay so let’s say car people. We all love the industry that we’re in and work hard for it so that it continues on to the next generation. For the next few months we are going to do an Employee Spotlight to showcase the cars our employees have and why they love doing what they do. Some people are just beginning the restoration process and some have completed theirs, but either way there’s a great story behind each one.

We’re starting with one of our Product Specialists, Yvonne Bowe. She got a 1968 Mercury Cougar just over a year ago. She’s wanted the car since she was a kid, but she said it took a little while longer to get than expected. I asked her why she wanted a cougar and her response was, “My dad told me that if I got a job and saved money he would help me get my first car. I found a 68 Cougar for sale in my town and had my dad go look at it with me. It had a blower and huge drag tires, but once it started up my dad said no… before he even SAW it! He stuck me in a Honda, but I had my eye on a Cougar ever since.” Yvonne says she doesn’t have a real goal for her car, just wants it “faster and stronger”. She took it down the drag strip once and now she’s hooked and wants the car fast. 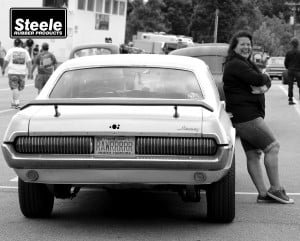 Her dad is the one who got her into cars, teaching her about all the tools, car care, and had her spend time with him in their garage working on his 1964 Falcon (http://www.steelerubber.com/search?year=1964&make=ford&model=falcon) and 1972 Torino (http://www.steelerubber.com/search?year=1972&make=ford&model=torino). Yvonne is trying to teach her daughter, Jianna, the same way her dad taught her. She helps her polish the cougar up for shows and is planning to have her be more hands on when she starts on the interior.

Yvonne doesn’t have any other cars right now, but she may in the future. She would love a 1964 Riviera (http://www.steelerubber.com/search?year=1964&make=buick&model=riviera&style=2-door-hardtop) and her daughter wants a 1978 Trans Am although that changes daily. She enjoys having her project car for herself but it’s helped her at work as well, giving her a better understanding of everything her customers need, plus she can relate to all of the heartaches of a project car and share some laughs with them.

It’s important to do exactly what Yvonne’s dad did for her, and what Yvonne is doing for her daughter… teach. We all need to show this next generation how to work on older cars, teach them the importance of the industry, and take them to a car show. Let them see what it’s all about! Yvonne is one of the many car people at Steele Rubber Products and we can’t wait to share some of the others with you. Share your stories with us and you could be our next Customer Spotlight!

Have a 1968 Cougar as well? Check out the parts we have for your vehicle:  http://www.steelerubber.com/search?year=1968&make=mercury&model=cougar&style=2-door-hardtop 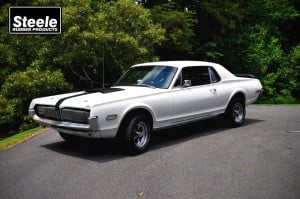