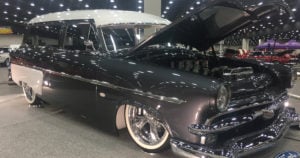 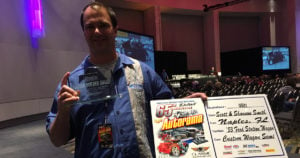 At this year’s Detroit Autorama, the Steele Rubber Products Master Builder Award was presented to Scott Smith for the incredible work he did on his 1953 Ford Mainline Wagon.

Mr. Smith told us at Steele, “I just want to say it was a true honor that I was presented with this award. This car was an 8 year build that myself and friend put together in my small 2 car garage with a limited budget.”

Steele Rubber Products Master Builder Awards are given to one outstanding vehicle restored with little or no professional help. All display vehicles at the Autorama events are automatically entered. The International Show Car Association (ISCA) selects one winner per show.

This 53 Ford, affectionately called “Southern Comfort” by Smith and his family, shows the true dedication of a car guy and his love for our industry. He got his passion for cars from his dad who started taking him to car shows before he could walk. And since he grew up in metro Detroit, Smith thought the best place to show this dream build off would be at the place where it all started. When asked about the details of the car, Smith says, “   , 700 R for transmission overdrive, Fat Man front end drop spindles, four link with a nine inch ford rear end, and the whole drivetrain is white and stainless… it’s as pretty on the bottom as it is on the top.”

Steele is proud to be a part of this award and we love being able to share a small part of the car’s and builder’s story. Smith said the most meaningful part of this build was the conversation and bonding with his dad that came from the build, as well as the lessons his children got to learn while he was building it. “They see the time it takes and the problem-solving that goes along with it.” He also enjoyed his family being there when he won the award so they could see how all that work paid off.

We look forward to seeing more work from Smith in the future! Congratulations again from all of us here at Steele Rubber Products! 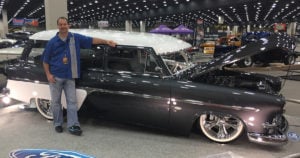 Have you won the Master Builder Award? Please reach out to us at cars@steelerubber.com with your story and photos so we can share with others!