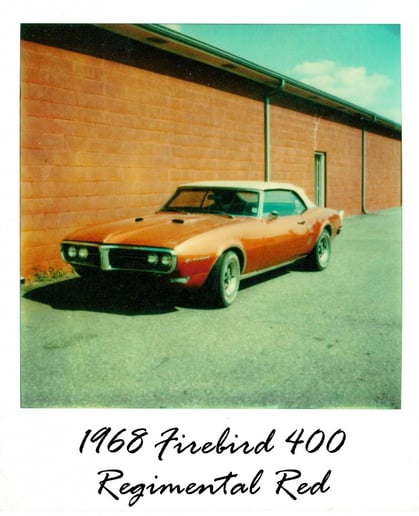 I’ve gone through many cars in my lifetime and had many favorites.  But the one I miss the most was my 1968 Pontiac Firebird 400 convertible, regimental red with white interiors.  It was just the right size, sporty, and plenty of power.  It had attitude with its snooty hood scoops. It was the one car that I wish I had not let a friend talk me out of keeping.

This was a long time ago.  My wife and I had just bought a house, we had a 3 year-old daughter, and times were tough.  When the weather was right, I would take our family to church in it.  Church was a half-hour drive one way so it made for a nice cruise through the country roads.  Well that’s when it all started.  Jim, a fellow parishioner, saw my car and fell in love with it.  I think he made it his mission to have me part with that car.  He took every opportunity to ask me if I would sell it to the point where it annoyed me.

Being a young family guy with a lot of financial obligations, there came a time when something had to give.  Since the wife and kid weren’t going, I had to sell the car.  Jim got his wish.  Being a friend, I sold it to him cheap.  I knew he would take good care of her.  I asked Jim for just one consideration; that if he was ever to sell the car, I would get first crack at it. He agreed.

Things went well for the next couple of years.  In retrospect, we could have gotten by without selling the Firebird.  But I knew the car was in a good home, or so I thought.

One nice summer day, I was cutting my front lawn when I saw a 1968 Firebird just like mine drive past the house and turn into my neighbor’s driveway.  It was driven by a 17-year-old kid who was dating my neighbor’s daughter.   I went over there to check it out and let him know that I thought he had a cool car and I had one just like his.  As I got closer I saw all the imperfections mine had.  I knew that this used to be my car.  I asked him how he got it and found out that it was sitting in the front yard of my buddy’s house with a “for sale” sign on it.  God was I PO’d.

The next time I saw Jim, I asked him about the car and why he didn’t call me.  Well, I found out that he was going through his own little hell with his marriage breaking up.  He apologized for not remembering.  I understood that he didn’t do it on purpose.  What hurt the most was that the car was destroyed two months later by the 17-year-old’s reckless driving.

I’m sure there’s a lesson to be learned here.  I know that I can’t seem to let go of any of my cars easily since then.  I can only say if you find one you really love; don’t let a friend talk you out of it.

And if you know of a ’68 Firebird 400 convertible, regimental red, going for sale, let me know.

Matt Agosta is the President of Steele Rubber Products. He is an avid car-enthusiast. When he is not working or restoring one of his classic cars, he enjoys traveling with his wife, local author Carolyn Steele Agosta.