In 2014, Steele Rubber Products teamed up with the famous Detroit Autorama to present the annual Preservation Award.  In 2014, the award was presented to Clarence “Slick” Patterson for his family’s 1939 Ford Convertible Custom.  The car was originally an awarding winning show car from the 50’s and 60’s, but was unfortunately tucked away for decades.  The family uncovered the car and rebuilt it to be exactly like its former show car days.  Today, the car is showcased by the Virginia Historical Preservation Society.  For Steele, the ’39 Custom represents all the good things about our industry and hobby.

The Preservation Award is given to a vehicle and individual that showcases the heritage of the hot rod and classic car industry.  These award winning vehicles may not have the most glitz and bling, but they represent the ideals, character and history of the hot rod hobby.  These are vehicles with amazing stories and journeys, and Steele is proud to help tell their stories to the world through the Preservation Award. 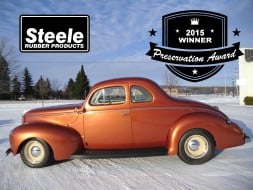 Coupe, owned by Mike Stowe, as the latest Preservation Award winner.  Mike purchased the Coupe in Michigan in 1958 for $125.  Over the next several decades, Mike and his family would assemble and re-assemble the car.  A true “driver”, the Ford was built to be enjoyed on the open road.  But, logging hundreds of miles can take its toll on an old car.  So, the car received new paint and an overhaul in 2012 to restore it to its current show car looks.

Mike’s 1940 Ford represents years of hard work and dedication, as well as miles of enjoyment.  These are the kinds of hot rod values that Steele wants to promote with the Preservation Award.  On the outside, the car looks completely original all the way around.  Throughout the vehicle are modern improvements, including air conditioning, tilt steering, five speed transmission and even a brand new 327 Chevy 350 motor.  We’re confident that Mike will never stop tinkering with his old Coupe – and that is exactly what the Preservation Award is all about.